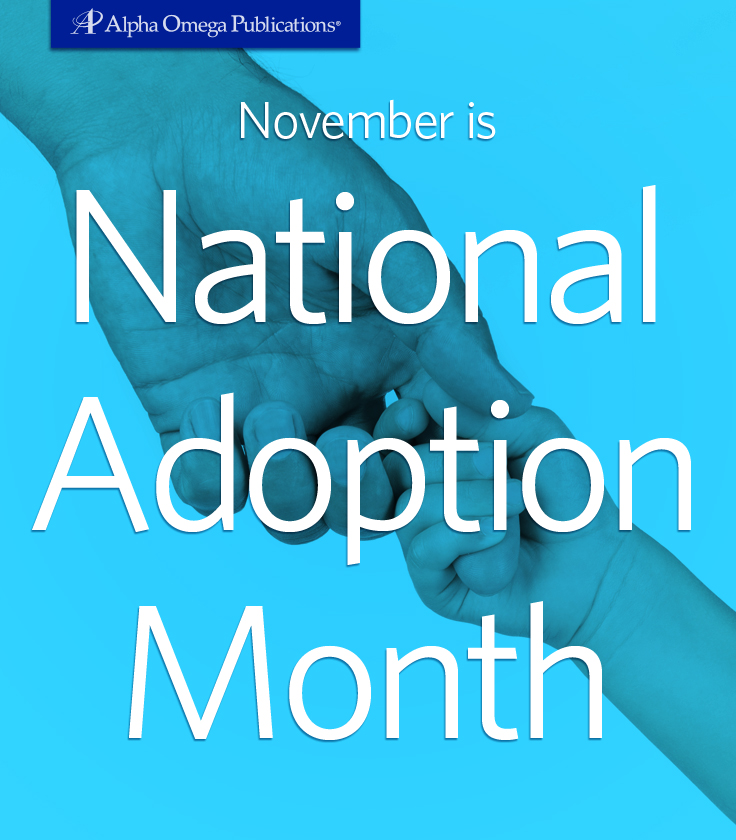 In honor of National Adoption Month in November, we bring you the story of a couple who were called to adopt under unique circumstances. At the request of the family, full names are not disclosed.

Mark and Hannah wanted nothing more than to have a child.

Both knew when they married in 2009 that they wanted to start a family. Less than two years into their marriage, however, the couple learned that if they wanted their dreams of parenting to come true, they’d have to adopt.

Last fall, they channeled all of their energy into the new plan and what they felt God had in mind for them all along. They chose a local Christian agency and began the paperwork and screening process.

On June 24, their prayers were answered, and the couple adopted a five-week-old boy.

“We were so excited,” said the new dad, who works for Alpha Omega Publications. “We’ve wanted this for so long. The dirty diapers, the crying, the things you hear horror stories about are things we couldn’t wait to do.”

Adoption had always been part of their plan, but they had hoped to have a biological child first.

“It was a hard switch to turn off,” he said, “but sometimes your Plan B is God’s Plan A.”

The couple had no restrictions as to the child’s gender or race. They believed God had a child picked out for them.

“If we limited race and gender, we were limiting God and putting Him in a box,” Mark explained.

The adoption is open, so the couple shares photos with their son’s biological mother, who is allowed limited visitation. They felt it was important for him to know his birth mother and the love she has for him, yet a few odds and ends still need to be finalized before the child is officially theirs.

Life has been chaotic as the new parents try to balance work, an infant, housework, and making time for each other. In the meantime, Dad is finding joy in seeing his son’s personality emerge. He describes his son as strong-willed, yet happy-go-lucky and content, with slight attachment issues that are common among adoptive children who have been in more than one home.

The new parents have a very different view of adoption than they once did. In hindsight, they feel God called them to adopt, and the painful, two-year wait led them to their son.

“We believe we were not waiting for a child, but we were waiting for our child,” Mark said. “We believe he is just as much ours now as if we would have had him biologically.”

Have you or someone you know adopted? Share your story below!

We are a middle age couple with 3 biological children, now in their mid twenties. Our youngest was born with spina bifida among other abnormalities that have required many hospitalizations and doctor visits. As a result, we chose to not have any more children. I was mentally and physically exhausted.

By the time our youngest was 11, I was regretting that we made the decision that we did. I was already 40. After talking to my husband and with the help of doctors, we put it into God's hands, where it should have been in the first place. After much prayer, along with stress and disappointment because it looked like God was not going to bless us with another biological child, we began looking into adoption.

Our only option financially was to go through the foster care system, not as foster parents, but doing straight adoption when a child became available. We were told that most straight adoptions are older children, like 5 and up. We prayed and I cried out to God to bless us with another child.

My faith was weak. We got a call about a little girl in foster care who was to be adopted. We said we were interested. My husband and I, along with 2 other couples, were interviewed for this child. When we left the interview, we did not have a positive feeling about it. We did not expect to be chosen. Well, God had other plans. I'm not sure how many days (maybe even a week or so) later, we got a call from our case worker. I assumed the call was to tell us that another couple had been chosen. Her first word was "Congratulations!" I said "What?" I still wasn't going to believe that it meant what it did. She went on to say that we had been chosen as this little girl's parents!

I was outside hanging laundry when the call came and my older daughter had brought the phone to me. When I hung up, I ran to tell my daughter. I wanted to call my parents, my siblings, everybody!. But, I exhibited self-control. I needed to tell my husband first, and he was at work. Needless to say, I was bubbling over with joy!

Our daughter came to live with us 4 and 1/2 months after we began visits with her. She was a beautiful blonde-haired, blue-green eyed 2 year old sweetheart! Yes, she was younger than what we thought our child would be. Answer to prayer! And just to confirm to me that this was the child for us, God even gave us a child whose birthday is only 3 days after our anniversary (I truly had desired to have a child in that month which had never happened).

Our daughter is now 10 years old. She has some physical and emotional needs, but I will forever be thankful that God put her in our family. She is such a good fit. We do everything together, although she'd rather skip the 'school' part. I had someone just the other day (who didn't know she was adopted) say that she looked like me:) Even though our faith was weak, God answered our prayers, and in a way that we could not have imagined. I wouldn't change a thing. God is so good!!

Are you a new customer? We'll need a few pieces of information before you can check out.