Bringing up Ben: Homeschooling a Child with Autism 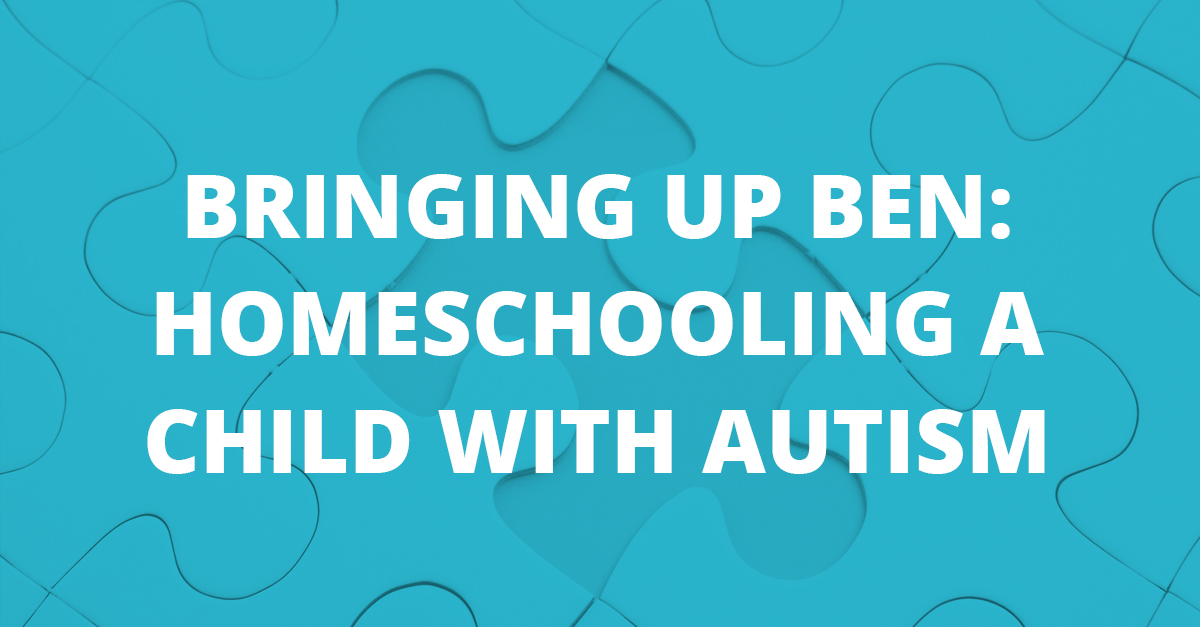 In honor of National Autism Awareness Month in April, we bring you the story of an autistic child and his family, who were called to homeschool under unique circumstances.

When Ben was a toddler, Leslie and Mark began to sense something was different about him.

Compared to his older brother, who was born with cerebral palsy, Ben just seemed a little eccentric. He refused to finger paint or touch food without a spoon or fork, for instance. And as Ben got older, he still didn’t speak. Instead, he babbled in his own language, and his brother translated.

Concerned by his behavior, Ben’s parents took him to doctors. He was diagnosed with Sensory Processing Disorder (formerly known as Sensory Integration Disorder) at age 2.

After receiving Ben’s diagnosis, Leslie began researching. The more she learned, the more she suspected that Ben’s hypersensitivity to the environment, inability to relate to others socially, and obsessive-compulsive tendencies were indicative of a similar but more disturbing disorder – autism.

Because of his tendencies, the Leslie and Mark prayed about where Ben should go to school. They knew he didn’t belong in a public school. At home, however, Leslie could control distractions and routines. She could teach her son at his level, rather than his age or grade. She started homeschooling Ben in kindergarten.

When he was finally officially diagnosed as autistic at age 9, Leslie was relieved.

“This was the missing piece of the puzzle,” she said. “Then it just hit me one night. This was God telling me I was supposed to homeschool.”

"I really think we wouldn't know what to do without SOS."
Autistic students are homeschooled in many ways, including Individualized Education Programs (IEPs), the Charlotte Mason method, and unschooling. After years of homeschooling with paper materials, which kept Ben bored and Leslie busy tapping him to regain his attention, they began to look for an alternative that would let him learn at his own pace in his own time.

With Ben's knack for technology, Leslie decided to try Switched-On Schoolhouse, the same computer-based program his older brother used. Ben took to it immediately, completing his first year of SOS with B's in every subject but math. According to Leslie, SOS works well for Ben for several reasons, including his need to read a passage multiple times for full comprehension.

"The computer is very patient, and he can go back and read it as many times as he needs to," she said. "I really think we wouldn't know what to do without SOS."

She said computer learning also gives Ben the diligence to finish lessons, the independence to work on his own, and self-esteem because he doesn't have to pick up a pen.

"His handwriting is pretty atrocious," Leslie admitted, "but this gives him the confidence to not have to worry about handwriting or have to concentrate on his handwriting and forget his answer. And nobody has to sit and be his scribe."

Today, Ben is a well-adjusted teenager who reads at his own grade level, though he retains some autistic behaviors that will probably never disappear. He balks at any change in routine, so Leslie announces dinner five minutes early to let him adjust to the fact that he’ll be transitioning to a new activity. In conversation, he's blunt to the point of not knowing when he's impolite. In addition, Ben will probably never be able to infer or anticipate a need. For example, when he’s the last one out the front door, he has to be reminded to close it.

Despite the daily hiccups, Ben has made astounding progress in the past decade, which his mom attributes primarily to homeschooling.

"Above all, special needs children need to grow up knowing they're normal and loved," Leslie said. "Special needs kids just need to be homeschooled to excel. That way, you can meet them where they are. If it's third grade math and eighth grade science, that's what you do."

Do you have a child with special needs? Share your story below.

Our 13 year old Joshua is also autistic. After several frustrating years in public school where his full potential was not being reached; I discovered Switched on Schoolhouse two years ago and decided to try homeschooling. I still work full time nights at a hospital, but because I work 12 hour shifts, I work less days and can adjust the schedule accordingly. I love the adaptability of SOS; I can spend extra time on things he needs the extra time on. I really can relate to the comment about handwriting. My son picked up typing very quickly and it has become a non-issue. He is not distracted by the other students and because he can relax, I think he learns better. I would highly recommend this curriculum for parents who have autistic children and are considering homeschooling.

My son, Stephen, is almost 14. We initially had him involved in the public school system for a special needs pre-school. When he went to kindergarten we were told he was too high functioning to be in a special needs class. Even though I applauded the teacher for volunteering to have Stephen in her class, the whole sistuation was a nightmare. I had homeschooled an older son in the past but I wasn\'t so sure about Stephen. I knew if I didn\'t do something he would be lost educationally. I pulled him home. We\'ve been using the Lifepacs which works well for us. I have been considering trying a computer based class like SOS but for now we will stick with what is working. He is pretty much on grade level with the exception of Language (he hates to write or speak). If you have a special needs child and you are thinking of homeschooling, go for it!

Our 10 year old son has a diagnosis of Autism Spectrum disorder. We started homeschooling 2 years ago and for the 2009/2010 school year switched to SOS. He is very high functioning and loves electronics. SOS is the perfect fit. He has been able to stay with his peers academicly and he loves the review and study games. His marks have been all A\'s and he is becomming a little more independent with school work. We will continue to use it. I love the fact that we can slow down the work until he has a grasp on the subject he is struggling with. His comprehension levels have greatly improved as he can read and listen to the work at the same time.

My 9 year old granddaughter has numerous \"labels\" from FAE, ADD, ADHD, Sensority Integration Disorder, etc. Even though I had 11 years homeschooling experience between my 3 children, it just didn\'t seem possible with Rebecca. Fighting to have someone diagnose her issue turned to trying to limit them. We have started our 2nd year homeschooling and are using SOS. So far things are going well. Rebecca reads well above grade level but is starting to show comprehension problems, while math is a struggle. The public school acknowledged jer diagnoses but determined she was too high functioning to ned help. I am so glad I pulled her out before the academic issues started to develop. Homeschooling is worth the struggle even for single working grandparents. Our children deserve the best.