A lot has changed in 35 years. While computers have slimmed down from DOS-spewing dinosaurs to lightning-quick laptops no thicker than a notebook, AOP has grown from a fledgling curriculum provider with one print product to an academically and technologically savvy empire with print and digital products, an online academy, and more.

1977. Alpha Omega Publications was formed to meet the need for high-quality and user-friendly educational materials in a fast-growing Christian school movement.

1978. LIFEPAC was born. Written and edited by 187 educators, it offered biblical integration throughout five subjects for grades 1-12. 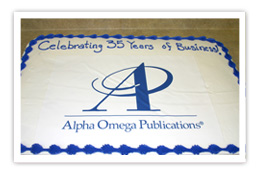 1992. Alpha Omega Institute was established to serve students in grades K-8 via mail correspondence. 2012 marks the 20th anniversary of this distance learning academy.

1995. Chandler became the company's headquarters. BMG purchased the building at 300 N. McKemy in Chandler, Arizona, and sold its office in Carlsbad, California. AOP sold its building in Tempe, Arizona, closed two remote offices, and moved all operations to Chandler.

1995. LIFEPAC gained color. The project included converting 50,000 pages of artwork to electronic files, re-editing all units, and consolidating teacher's handbooks, score keys, and manuals into one guide per grade level.

2010. AOP launched Monarch, AOP's first online curriculum for homeschooling. In addition, gobmg.com was expanded to include a web store.