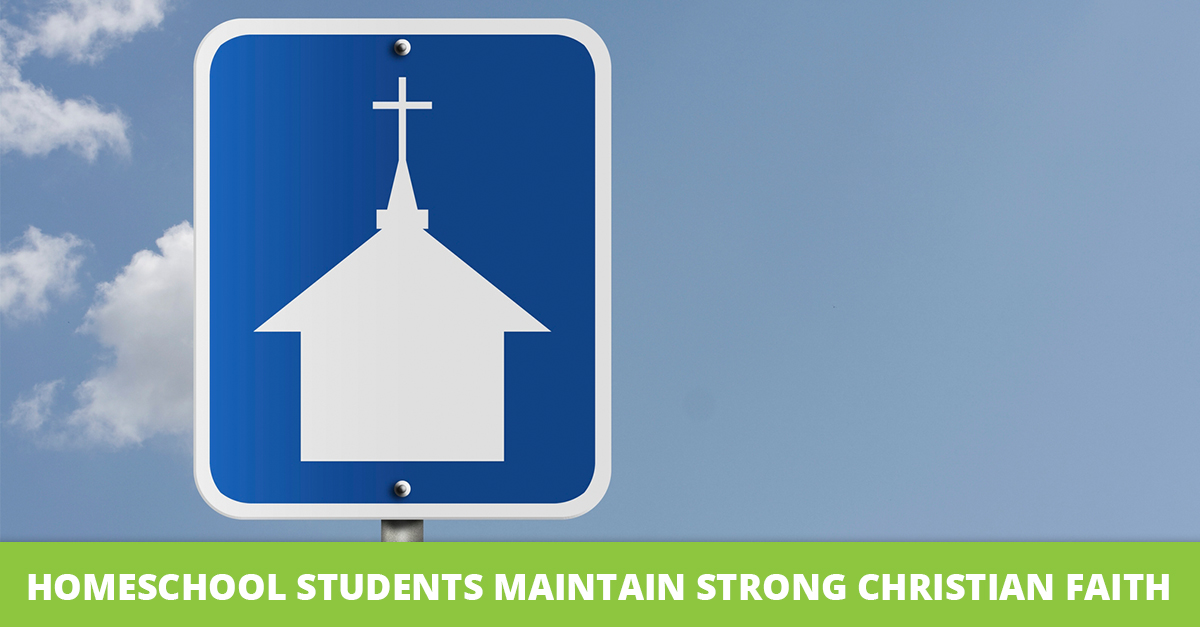 Recent survey results indicate that nearly 90% of churched homeschool students remain strong in the faith, a rate that far surpasses their churched counterparts who attended public or private school.

In an attempt to correlate educational methods with the spiritual decisions of children raised in the church, Generations with Vision and the National Home Education Research Institute conducted a survey of nearly 10,000 young adults between the ages of 19 and 38, and the results were clear.

As reported by Christian News Network, “The study found that individuals who were homeschooled, attended church regularly, and had good relationships with their parents were most likely to remain involved in the Christian faith.”

Other survey results revealed that homeschool graduates are least likely to be influenced by the secular culture around them. While nearly half of children raised in Christian homes and educated in public schools supported same-sex marriages, only 16% of homeschooled young adults supported it. In addition, just 9% of homeschool students were sexually promiscuous as opposed to approximately 1 in 3 churched students who attended public or private school.

Overall, the survey left Kevin Swanson, the director of Generations with Vision, with one obvious conclusion.

“Home education is the best educational choice, if we value the carrying on of the faith,” said Swanson.

I have a 15 year old daughter that I really need help with. I am a Single mother and a disabled veteran where I have raised her on my own since birth without her father around. My daughter has had a rough life from her father not being in her life, to moving around a lot to different states, cities and schools and many other factors.

The truth is, is that I am having so much trouble with her education because of the different moves, and having ADHD, that she has a lack of motivation to want to be successful in school. She has a hard time with teachers, not taking responsibility for her own actions of not doing school work, just does not care, and has very poor grades.

In her 8th grade after the 1st semester, I pulled her out of public schools to home school her and thought I could but I had a hard time with her listening to me and not going school work. CPS was involved in our lives for other reasons than school last year and when they found out I was home schooling her ( In the State of Texas, we are free to home school our children any way we want without CPS getting involved) and tried to force me to re enroll her back into public schools of which I did anyway because of my daughter complaining of being home all the time and her refusing to do school work for me.

Beginning of 9th grade I tried to home school her again but our computers went down and forced to put her back into public schools.

This week I made a decision to pull her back out of public schools because of problems I was having with the High School she was in and put her into the Alpha and Omega Home schooling program to see how it goes.

My problem I have is that I am too afraid of her not listening to me doing her school work. I want her to be successful and graduate on time and concerned she will loose credit hours to graduate. I do not know what to do because I don't want her to get behind but yet I want to help her the best I can.

What I like about this home schooling is that we will get to spend time with each other, improve our relationship and since I do not work, we can build our relationship and help her grow into the fine young lady she is. I also like the fact that I can test her to see where she is at with her academics and to see where she is behind in and help her graduate.

Over the last couple of years I have turned my life over to the Lord and he has helped us out a lot and know how much he cares for us. My daughter does not understand nor does she allow me to talk to her about the Lord and how he helps us. I am hoping through this program that she will start understand the Christian faith and build her relationship with God.

I really need someone to talk with regarding my daughters education and her future. Just so scared what I need to do to help her be successful when it feels that she has lack of motivation in life and school.

Hello, Kiley I cannot assume that I know exactly what you are going through of course because I am not in the same situation you are in, but I do believe the Lord like you already stated is helping you and can help you. If you have decided to home school your daughter is because you love her, now what you will have to do is show her that love. The one thing that I can tell you is not to have fear and that is something you will be able to overcome by renewing your mind with the Word of God. I am not sure which program you are using but if you are having trouble having her do computer work, maybe you should try having her do the workbooks. Don't give up the Holy Spirit can guide you and help you, the only other thing I can think of sharing with you is this link to a wonderful teaching about love, because Lover Never Fails http://www.awmi.net/extra/audio/1054

Hi Kiley. I have a 12 daughter diagnosed with ADHD and dislexia. One thing I've noticed about these wonderful kids is they tend to be more sensitive and loose focus much quicker than others. I have found a few things to be helpful. First, don't take things personal, pray, ask for God's wisdom in dealing with her. Second, staying involved with them, it lets them know you care and that they won't be allowed to just not do work. Third, shorten assignments, so they don't become overwelmed and frustrated. If she doesn't score a certain grade, we use 85%, she has to re- do the assignment. Fourth, there are great curriculum choices for things like grammar, math, spelling, whatever. I like AOP science/history because it does allow for flexibility in all the above, but we do use the discs. Next, don't get discouraged. Listen and watch and you'll see what her needs are, then search for those things. We are their parents. We know what is best for them. Bible time is another thing kids need to show the importance of that discipline and will help bring you closer as a family, and your day will go better when started with God! Prayers for you both!