The Pros and Cons of Cursive 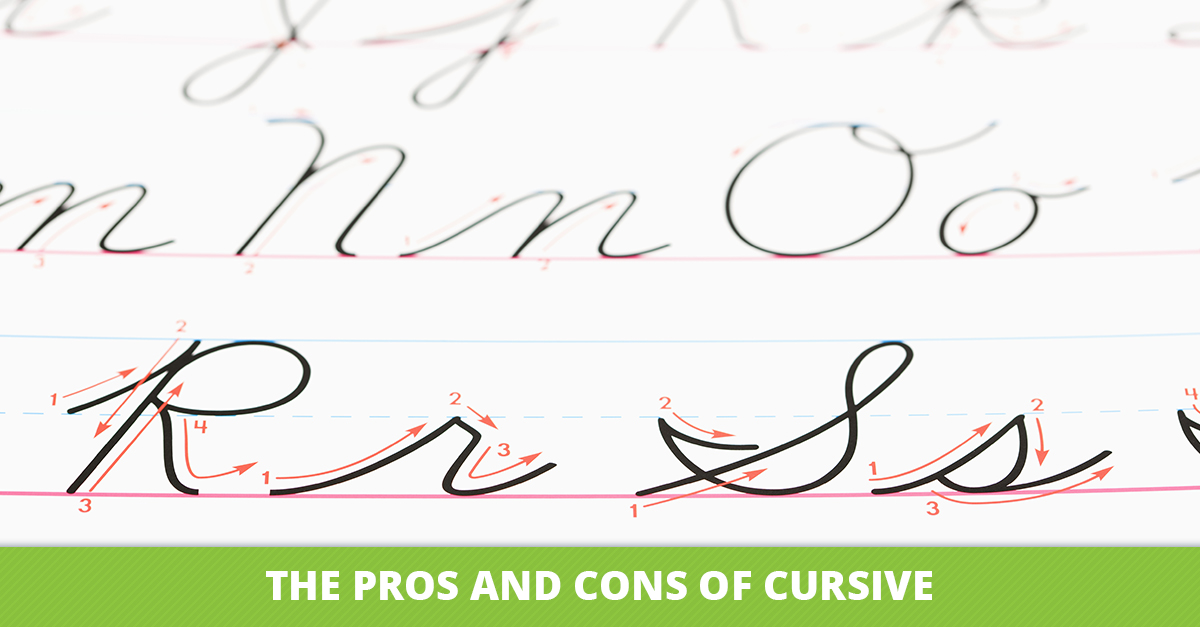 Kids today can Skype, build a blog, and tag a friend. But how many of these modern communicators can still read and write cursive?

Fewer than ever before, studies show. Penmanship is going the way of a lost art, even in homeschools.

“Handwriting is 50 percent of literacy, but children are seeing less and less formal handwriting instruction,” said Toni Schulken, a child occupational therapist who is dedicated to increasing writing literacy.

Vanderbilt University research reveals that children spend just ten minutes a day practicing print and cursive. In many homeschools, parents are simply too buried in lesson plans to squeeze in penmanship. In an effort to keep up with core subjects, some teachers are asking themselves, “What lessons can I forgo?”

With so much pressure to preserve penmanship, is the struggle worth the results? Consider the pros and cons of teaching a child to read and write cursive:

Pros of Teaching Cursive to Children

- Students are more literate if they can read and write cursive, and it allows them to communicate with older generations, like family members.
- Students can sign their names, a standard requirement as an adult.
- Students will have a tool they can apply later in life that gives them more options.
- Students can gain a practical life skill that is becoming a lost art.
- Students will be able to take notes faster in college. Printing letters, which requires raising and lowering the pencil or pen point for each letter, slows you down, as opposed to cursive, where you only have to raise and lower the point at the beginning and end of each word.

Cons of Teaching Cursive to Children

- It can take time away from core or more “relevant” subjects.
- It can be time-consuming and frustrating for parents.
- If students don’t use the skill regularly, they could forget it.
- Penmanship is not as valued in education and society as it once was.
- Because cursive is faster to write, it can appear less legible than print and create confusion. Every year, up to $95 million in tax refunds aren’t delivered correctly because of unreadable tax forms.

Another quandary facing the fate of handwriting: If technology advances to the point that students use electronic or digital gadgets to write their names, do their school work, and communicate, will teachers eventually decide that preschoolers shouldn’t bother learning to write their ABC’s?

“The idea is that each mastered skill builds on the next as children first tackle pre-writing tasks and eventually build sound writing habits,” Schulken explained.

“The gap leads to frustrated kids, stressed parents, and discouraged teachers who often don’t know how to help.”

The most important documents are written in cursive, the Constitution, Declaration of Independence etc. Better learn how to read cursive and understand it. Once you learn nobody can take that away from you. Cursive is easy to remember. Most of the letters look like script. First letters to learn are the children's name. I love writing in cursive because it's easier on my hands (motor skills). Both of my children know cursive. Do it on the weekend. It's fun to learn. I only showed my daughter 10 letters. She liked it so much she taught herself how to write in cursive connecting the letters.

I have TERRIBLE handwriting. My eyesight is very poor and when I was a young child the only way I could see the page well enough to write was to lay my face on the paper. I was continually reprimanded in school for being lazy because I always had my head on the desk and I was constantly told how bad my handwriting was. No surprise, since I could barely see it. Reading, I literally had my nose in the book.

By fourth grade, I finally was screened for vision and received super-strength glasses. Despite my terrible handwriting, I managed to get into college and graduate school, earn a Ph.D. and found a couple of companies. Of my four children, two have very nice handwriting and two are pretty mediocre. I didn't start homeschooling them until fifth grade, so I never bothered with handwriting.

Learning to read cursive takes far less time than having legible handwriting, and, as Kelli says, many important documents are written in it. So ... if I had started homeschooling from day one, I think I would have taught my children to read cursive and done handwriting as part of art, when and if I got around to it. (Handwriting that is, I think art is pretty important).

As a public school English teacher and a homeschooling parent, I cannot stress the importance of cursive writing. Forget the art of cursive for the moment. Being able to write legibly, whether block or cursive, is a simple and necessary skill of communication. I have been teaching high school English for 30 years and the fine motor skills of students have lessened over those years. Whether block or cursive, students are not writing legibly.

A child's first experience with a pen or pencil is a scribble; it is typically in swirls. Very rarely does one see straight lines. It should follow to take that initial natural skill and turn it into the proper letters for communication through cursive writing. Block letters are the result of the printing press and, though necessary and entrenched in our society, should be taught to read printed text. A child should know both. The speed, the art of, the ability to communicate with the older generation (including original and foundational documents of our nation) are all good reasons, but I'll stand on the natural flow of the hand and arm. It is easier to learn if taught from the very beginning of a child's educational career.

With all that, however, I fear that cursive will pass out of existence as there are not enough supports in our current system of education (homeschool and public) to continue this beautiful way of communicating.