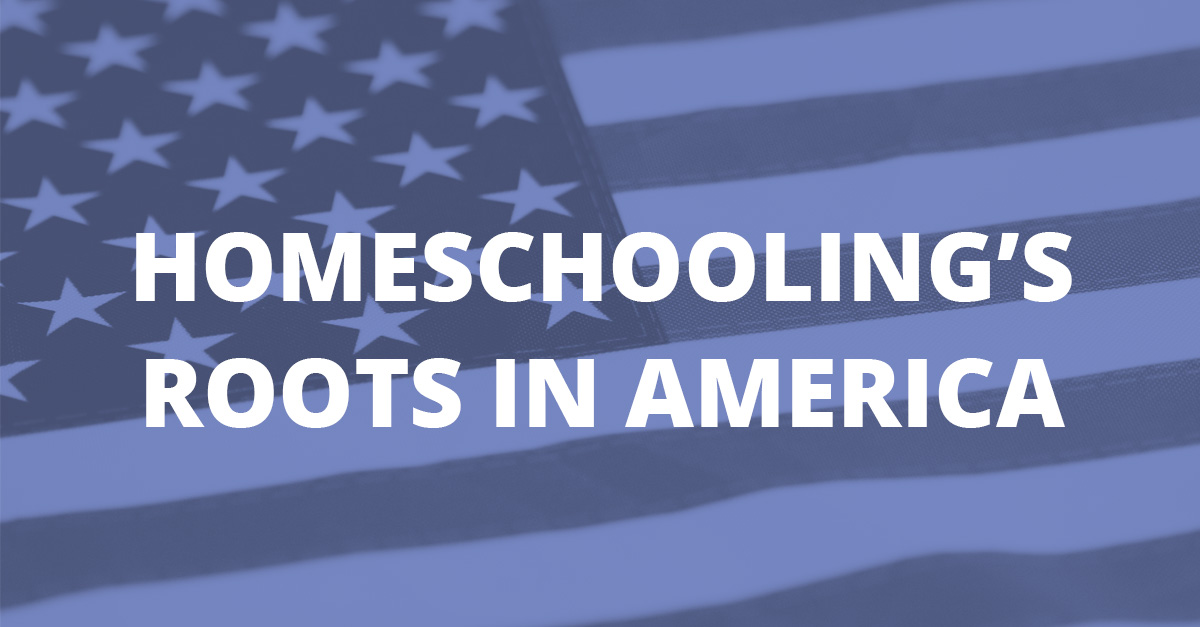 When do you think homeschooling first began in the United States? The 1950s, '70s, or maybe the '90s? Surprising as it may seem, children in America have actually been home educated for hundreds of years. In fact, homeschooled students of the past include well-known inventors, scientists, authors, and statesmen, such as Thomas Edison, Booker T. Washington, Albert Einstein, Agatha Christie, Samuel Clemens, Abraham Lincoln, Benjamin Franklin, and Theodore Roosevelt.

Centuries ago, the education of most young boys and girls involved learning practical life skills while doing chores and meeting the daily needs of the home. Fundamental reading, writing, and arithmetic skills were taught by parents who knew them, and if parents didn't feel adequate to teach, they would contact other parents, pool their resources, and hire a teacher. In exchange for room and board in one of the parent's homes, the teacher would instruct all the children living in the surrounding area.

However, late in the 19th century, American governing bodies introduced legislation that forced parents to send children to public schools. Led by men such as Horace Mann and Henry Barnard, these common-school reformers wanted all children to benefit from a superior education, rather than just the fortunate few from wealthy families. As a result of their efforts, free elementary public education became the new norm. Compulsory attendance laws soon followed and were first passed in Massachusetts in 1852 and New York in 1853.

By 1918, all states passed laws requiring children to attend at least elementary school. Opposed to common schooling, Catholic parents set precedence and began challenging this new educational system. Creating their own private schools, they found support in the 1925 Pierce v. Society of Sisters Supreme Court ruling that said children could attend private schools and not be compelled to attend public school.

Forty years of governmental-controlled education passed before today's modern homeschooling movement started. In the 1960s, men such as Ivy League graduate and teacher John Holt and Dr. Raymond Moore, an expert in early childhood development, began questioning the current methods of education entrenched within the public school system. Taking on battles that included phonics versus look-say reading methods, gentle teaching rather than drill-like instruction, and hands-on learning activities compared to traditional textbook curriculum, they encouraged different philosophies and approaches to education. These modern-day pioneers promoted the delay of formal instruction and learning through a child's own natural curiosity rather than education just being the acquisition of facts.

In addition, as public schools began to eliminate the Bible, prayer, and a Christian worldview, more parents were motivated to teach their own children. During the 1980s, tax regulations also changed for Christian schools, resulting in the closure of many smaller private schools. Rather than sending their children to public school, many of these Christian school parents joined the ranks of the homeschooling movement. Through the grassroots diligence of these families and other parents disillusioned with public schools, legislators were educated and homeschooling laws were enacted to allow legalized homeschooling in almost half of the United States.

In today's educational realm, homeschooling continues to be a controversial topic, but despite the debate, homeschooling is spreading its wings and is up 74% since the Department of Education started keeping records in 1999. In fact, according to the most recent official survey by the National Center for Education Statistics, over 1.5 million children were homeschooled in America in 2007.

As it embraces 21st century technology, homeschooling will continue to be written on the pages of history. Legal now in all 50 states and many countries, its future lies in the next generation's hands. No longer advocated just by Christians alone, homeschooling's praises are sung by many, including parents of special needs children, gifted and talented students, and those with just ordinary kids. Like the families of yesteryear discovered, homeschooling is a viable form of education that allows students to not only pursue their God-given dreams and passions, but also become responsible citizens who make America great!

Crawford, D. (2007). The History of Home Schooling. Retrieved from http://ezinearticles.com/?The-History-Of-Home-Schooling&id=442867

Dobson, L. (2000) A Brief History of American Homeschooling. In Homeschoolers' Success Stories: 15 Adults and 12 Young People Share the Impact That Homeschooling Has Made on Their Lives. Retrieved from http://www.synergyfield.com/history.asp

Farenga, P. (1999). John Holt and the Origins of Contemporary Homeschooling. In Paths of Learning: Options for Families and Communities. Retrieved from http://mhla.org/information/resourcesarticles/holtorigins.htm

Farenga, P. (2002). A Brief History of Homeschooling. Retrieved from http://www.hsc.org/prohistory.php

Miller, A. (2010). History of Homeschooling in America: Homeschooling Makes a Comeback. Retrieved from http://www.faithclipart.com/guide/christian-education/homeschool/homeschool-history.html